My baby is almost 20 months old and such a cute baby. He also talks a lot, for his age. In Kindergarten, he is way ahead of his peers in the speech department.

He mostly speaks German because I haven't been as fastidious about speaking English with him as I was with his sister. I'm trying to gain lost ground now, so wish me luck.

Anytime I've been on the phone with someone, he always asks me afterwards "war dat?" baby for 'wer war Das?' meaning 'who was that'? Now he's grown a bit he says "war Das?"

It's become a running joke in our home, so that we say 'war dat' to each other.

So yesterday Grandma (DHs mum) called and T talked to him, then baby E wanted to as well. So his sister gave him the phone and he talked to her. And afterwards, he gave me the phone and when I hung up, he immediately said 'War das?'. Lol. Fun times at our house. 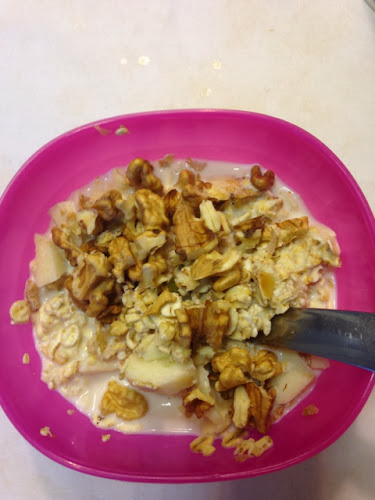 Here's a photo of our Saturday morning musli bowl of goodness. My son refused to eat such nonsense, but my daughter dug in heartily. Have a great weekend.

Finally, I have a word to describe my personality! According to the free online dictionary, an ambivert is someone who exhibits ambiversion.

A personality trait including the qualities of both introversion and extroversion.

Every personality test I've ever taken has been unable to group me and now I know that there is a name for me, for my personality type. I am an ambivert who leans more towards introversion.
This has been a week of self discovery for me, I saw the brilliantly drawn How to interact with introverts yesterday and it resonated very loudly with me.

I also listened the Susan Cain on Marie4leos YouTube video talking about networking tips for introverts, after which I stumbled on this brilliant TED talk by Susan Cain, which in turn led me to the word Ambivert - which is who I am.

I have a daughter who is growing up with exactly the same personality type and I really want her to grow up self confident and knowing who she is. This journey of self discovery is as much for her as it is for me.