On working mums: A baby or a cat? Why not both?

I remember that day in Cologne. It was 2006 and the German football World Cup was playing in Germany. A few of us from work would leave work during the early evenings to watch matches at the various viewing locations across the city. I can’t remember exactly which countries had just played, but it had been an exciting match and we were chatting on the way to the cars.
I can’t clearly recollect what we were talking about, but it was likely about children because a female colleague suddenly turned to me and said “you have to decide what you want, children or a career. If you want a career get a cat.”
I carried the anxiety along with me for years since I am an ambitious woman and I love to push boundaries, but I have always wanted to have children ever since I can remember. So I it was difficult deciding on the right time to have a baby without having to automatically end my career ambitions.

Yes I can finally say it aloud without feeling ashamed that I have a fierce drive for achievement inside me. I was almost 38 when I started to own this part of me that has always been with me since I can remember. I am ambitious and I own my fierce ambition unapologetically. As long as I don’t have to do anything illegal, dubious or harmful to my family, I will give whatever I have to bring whatever I set my heart to to fruition. And I have set my heart to quite a bit. Watch this space. 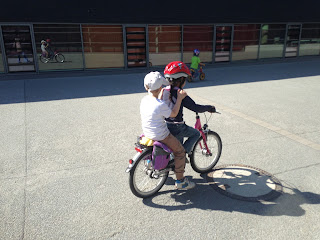 Luckily, the decision was taken out of my hands and I found out I was pregant in 2008 and I had my daughter. I absolutely loved and love being a mother and she quickly became the center of my life. I took time completely off work for 8 months. At some point I decided to go back to work and I was grateful to work for a company and live in a society that gives parents the opportunity to work part time. Once I started work though, at 10 hours per week, I found that those number of hour were too limited for me to be able to work on anything too exciting or challenging. So I started to increase the number of hours I worked. Eventually by year 2 of my parental leave, I was working 30 hours a week and I was finally working on something exciting, tasking and challenging. I became pregant ith my sn that  year and up until 8 months pregnancy I was commuting once a week and I was often mind numbingly tired but was never bored and never regretted going back to work.

When my son came in the spring of 2012, I was sure I would not be working part time. It was either I was working in a challenging role, which typically meant working full time or I was not going to work at all until I was ready. I had  sent in my application for parental leave for a period when I happened on the perfect role for me. It was exactly what I had been looking for, but unfortunately the timing was a bit off.  As I had expected there was no chance to do that job part time. I had a 5 month old baby and I had to decide what to do.
I spent time in prayer asking for a signal that it was the right job for me to take. For me in the that period, the right signal needed to take the form of flexible childcare. Someone who would come in and watch the baby at home while I worked so I could continue to breastfeed. God answered my prayers and R came into our lives. She had just turned 60 and had been recently widowed. Lonely and grieving, we were as much an answer to her prayers as she was to ours. She has become like a grandmother to my kids, gone on business trips with me and the baby and become a part of our extended family.
I now have the baby and the pet ( in our case two hamsters) and a job that challenges and excites me.
Has it been easy and without bumps? No I wouldn’t say so. But we have found our own solution that has helped us ensure having a successful career and children are not mutually exclusive for me.
I remember reading a section of an biography of Michelle Obama and she said something to the effect that you need to get it all done, but you don’t need to get it all done yourself. Don’t be afraid to ask for or get help in your quest for work life balance. I can confidently say it has not made me a worse mother of less connected to my kids, just a less stressed out working mum. Don’t be afraid to look for your own unique solution.
Email ThisBlogThis!Share to TwitterShare to FacebookShare to Pinterest